The basic objective of this monitoring protocol is to assess the changes in incidence and abundance of the taxa as well as their role in the positive interactions between plants in maintaining biodiversity and ecosystem functioning in extreme environments and within a framework of global change. The methodology proposed pursues three specific aims: to advance in our knowledge of the structure and the functioning of these ecosystems over stress gradients; to evaluate the role of the positive interactions between vascular plants in this structure and functioning, and finally to apply the knowledge acquired to the management and conservation of the biodiversity in mountain habitats. 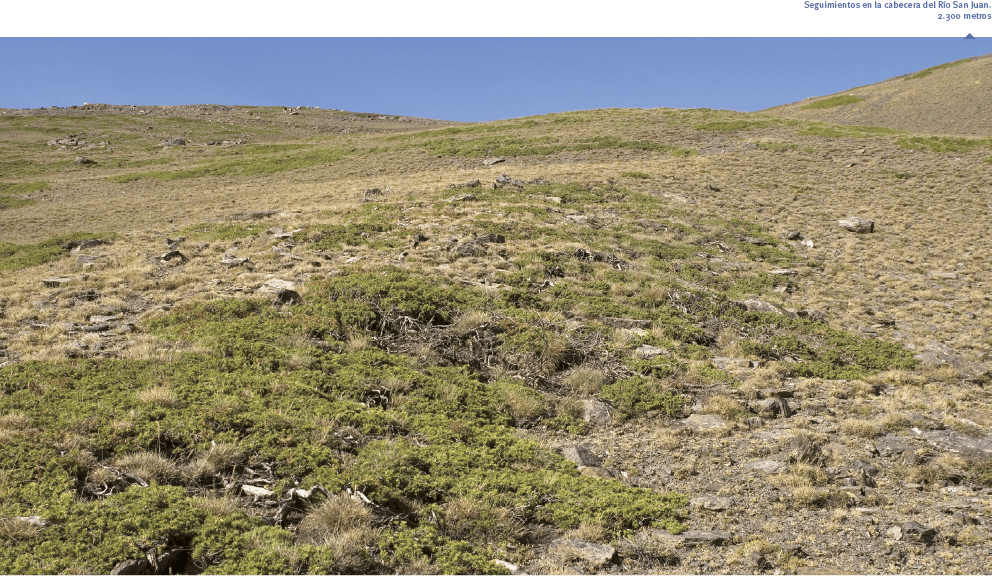 The monitoring is planned over an altitudinal gradient, combining two different situations or physiognomies that coexist at this elevation: the psicroxerophilous grasslands and juniper-broom shrublands to their altitudinal distribution limit. The structural difference is based on the different density of dominant shrubland species, particularly of brooms and junipers. All this is undertaken with three interrelated monitoring methods designed as: sampling by line intercepts, sampling of cover diversity, and the study of facilitation.

With these premises, paired plots were installed from 2,300 to 2,700 m with 2 or 3 replicates per elevation. These paired plots are situated adjacently and represent situations with different thicket density, with a minimum of 45% for the shrubland encroachment and 25% for the most open areas. Each one is subdivided into transects every 8 m, on which two monitoring protocols were applied. On the one hand, the line-intercept method examined the different types of patchiness that in an imbricate way intercept the line marked by a measuring tape as well as its dimensions (width and cut-off points with the measuring tape) and associated species (defining patch as an aggregate of thicket or grassy area or else rock or other types of surface). On the other hand, for detailed knowledge on the cover and diversity, quadrats of 1.5 m square were used to record the abundance (%) of the taxa present as well as the different types of surface (rocks, fixed stones, loose stones, bare soil, plant remains, or excrement). Only perennial species were considered.

With the aim of determining the function of the ecosystem in relation to the nutrients and soil microorganisms, soil samples were extracted in the surroundings of the dominant species for each type of aggregate (Juniperus communis subsp. nana, Genista versicolor, Festuca indigesta) as well as bare soil.

The specific monitoring to study the phenomenon of facilitation included 20 isolated individuals of Juniperus communis and in turn Genista versicolor within a well-defined outline. This enabled comparisons of incidence and relative abundance of the species, according to the Braun-Blanquet scale, both for the specimen chosen as well as for the adjacent grassland.

Initially a triennial periodicity was established, to be modified depending on the results in successive replicates.